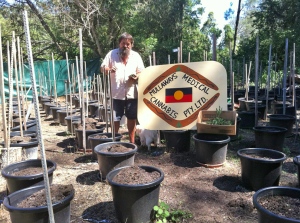 TV star and shark protection advocate Ron Taylor is among the many patients with chronic or terminal diseases who may miss out on their medication following last week’s raid on the Far North Coast property of medical marijuana provider Tony Bower.

Dr Richard has written a letter of support to Mr Bower, stating the importance of medical marijuana when other medications fail.

‘I am shocked and disappointed that the police of your country do not care about the people Mr Bower is helping; people he is assisting with the approval of their own doctors,’ he wrote.

‘[Oncologists] are seeking scientific evidence to verify which cancer cells have receptors to cannabis oil. We know already that some brain cancers can be cured with it, and we were hoping that it could be effective on Ron Taylor’s leukaemia cancer cells,’ he added.

‘The police have destroyed Tony Bower’s crops, at the same time seriously cutting the chances of many desperately ill people for whom this molecule (cannabis) could have been effective. It has taken away their hopes, their last chance for life.’

Mr Bower told Echonetdaily yesterday that, despite the police raiding his Crescent Head property by helicopter last week, he is endeavouring to keep up supplies of his marijuana tincture to his many patients.

Police have declined to comment on the raid apart from admitting that Mr Bower was issued a court attendance notice for the offences of cultivating ‘an indictable quantity of a prohibited plant’ and supplying a prohibited drug.

Mr Bower will face Kempsey Local Court on 16 April and plans to contest the charges. He said the hearing would turn into a test case on the use of medical marijuana in NSW by default.

Mr Bower says he has been battling to have his tincture approved by the Therapeutic Goods Administration (TGA). But before the TGA can act, approval to produce and research his cannabis must be granted by the NSW health department, which has so far declined to do so.

Mr Bower was quick to defend local police, who he said ‘didn’t want anything to do with the raid’. He added that his mobile dispensary has regularly provided tincture to patients from various north coast locations, including outside the Kempsey office of deputy premier Andrew Stoner, without interference from local police.

Twelve years ago he was taken to court on similar charges and ‘emerged with what amounted to an exemption to grow cannabis for medical use’, the Sydney Morning Herald reported.