Seniors getting younger by the year 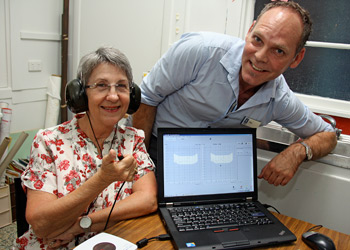 Maybe the word needs to change. When we think of ‘seniors’ we think of wizened, white-haired old ladies who sit in the corner with crocheted rugs over their knees, but most seniors are much more vibrant than the image the word evokes. Many seniors don’t see themselves as being old and it is clear that most of today’s older generation are certainly a lot younger than their twentieth-century counterparts.

‘I don’t think of myself as being old yet’, says Ingrid Johnston. ‘I am having trouble adjusting to being a “senior”. I spent my 59th year worrying about being 60 because my grandparents at 60 were at the end of their lives. I was very happy after that birthday when I found I could still do things.’

Seniors Week is a statewide celebration of the elder generation and most communities have activities, classes and extra services available – yesterday saw free hearing tests with Australian Hearing at the Brunswick Heads library.

Ingrid, who lives in Ocean Shores, says she decided to take the hearing test on offer for seniors mainly for curiosity’s sake. ‘I think my hearing might be going and I am here to find out how bad it actually is.’

Australian Hearing’s Peter Bodycote, who is performing the tests on seniors, says he has a fairly full schedule of tests during the week and the program has received a good response.

Ingrid says she has attended U3A events as well during the week-long statewide celebration and she believes that exercise is helping to keep her young; she goes walking and takes Qi Goong classes with the U3A. ‘I think these days we are more aware that we need to move our brains and our bodies. We have to use it or lose it.’

[Image]Peter Bodycote from Australian Hearing puts Ingrid Johnston through her otic paces at the Brunswick Heads library for Seniors Week.