Christine Willmot, Sunrise Thanks Echo, for getting worthy successors for the Mungo Comment space. Margo Kingston, for instance, in a recent...
Read more

S Haslam Byron Fresh is an enduring cafe favourite, right in the beating heart of Byron, on the corner of...
Read more

The Shai Guy Finally emerging out of COVID-time, singer songwriter Shai Shriki is preparing a great show and a fundraiser...
Read more 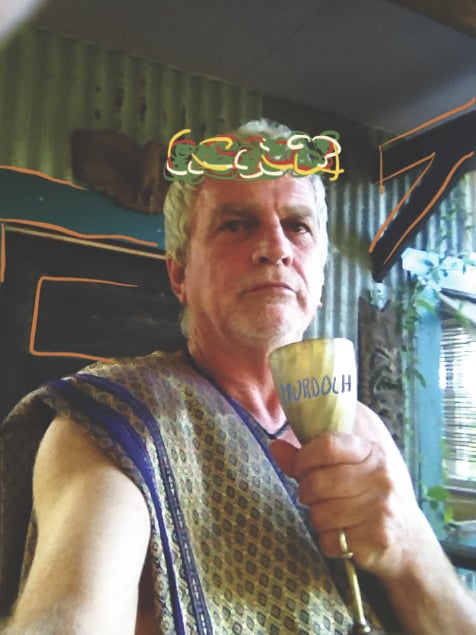 Well, it’s not really a toga. It’s a sarong, which I have draped over one shoulder as well as around my waist. I am more used to sarongs, which I consider to be the epitome of good clothes design, but I’m in a Roman frame of mind since the election, so… it’s a toga.

I thought about wearing a laurel wreath too, but I don’t have any bay laurel trees here at my shack under the cliffs at the end of the world. The Romans used branches from bay laurel or cherry laurel trees to make their headwear. None of those here. I have lantana… but it leaves a rash.

I’m in mourning. A sort of cathartic, celebratory mourning.

I dedicate today to the fall of Australia. In memoriam.

All empires fall. The Roman empire fell in the fifth century.

For some time, the rich had been gaining ever more control of the Roman Empire government. Eventually, these wealthy types determined who became emperor and who became senators (themselves). They exempted themselves from paying taxes. They used the state to create capital-friendly conditions that would favour their business enterprises despite knowing it would degrade the environment and impoverish the people in the long term. The poor went into debt and became indentured workers for their wealthy masters.

Though wise voices warned of approaching calamity, shareholders overrode citizens’ concerns and looked only to the month of Julius (the end of the financial year) when short-term rewards were shared among the bloated.

Well, not for the fall of the Roman Empire, anyway. He is but a pawn, like one of those unimportant Roman emperors during the decline who ran about, in sandals from Persia, perfume from Egypt and Speedos from China, bowing to the wishes of his masters until they tired of him and appointed another.

Tonight I will drink wine from a silver goblet. In vino veritas. If I had a lead goblet I would drink from that. If I drank enough lead I would possibly believe in the corporate vision too. I will farewell Australia as it starts the more rapid part of its decline. Aeternum vale.

The election was won by Murdoch and the mining magnates. Scumbagum totallum. After decades of flogging business values over human values, society has now truly been replaced by an economy, citizens by clients, democracy by oligarchy. Absolutum dominium.

The transition is complete. The sacking of Australia has officially started. The Visigoths invaded and plundered Rome in 410. The corporate invasion of Australia starts now.

Don’t get me wrong; the plundering has been going on since the first boat people arrived in this terra nullius in 1788, but now it’s official. Come one, come all. This is the last great sale before… well, we’d rather not talk about it, would we? The real issues facing us were never election issues.

When the reality of a small planet with a fragile skin of atmosphere eventually impinges on the collective consciousness, the land will have been laid waste and the fat pigs will be offshore or offplanet.

Wow, that sounds pretty glum. But it’s somehow liberating too.

When the government is so obviously against its people, it’s easier to see a path. A line was drawn, and, well, I’m on the other side.

Tomorrow I will dress in samurai sarong (Bali sarong made in China) and sword (Japanese). The battle is on. I am a citizen and the Vandals have breached the gate.

‘Find the diamonds in the shit,’ the driver says to me. We jump the speed bump as we exit the university. The Subaru doesn’t really ‘jump’ the bump – it doesn’t get air – but the car does rise up on its toes before slumping back heavily onto its hydraulic heels, like a sumo wrestler.
Read more
The Echo is made possible by the support of all of our advertisers and is brought to you by this week's sponsor Dan Murphy's.