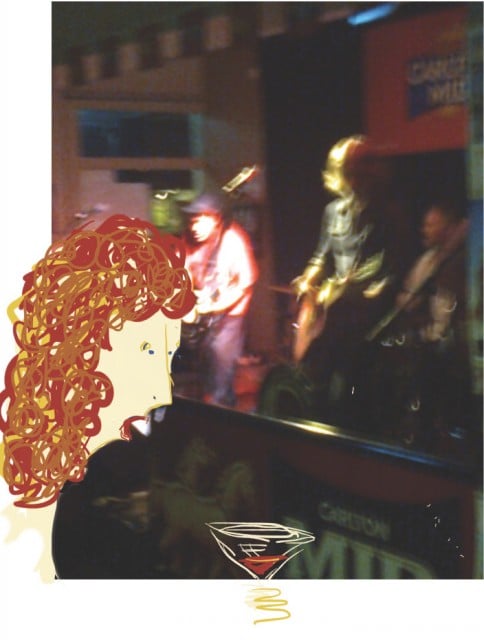 She sails into the bar, half a dozen people surfing her wake. A grand entrance.

Having been banned from the hotel last night for unacceptable behaviour on stage, three tough-looking women in blue shirts emblazoned with security escort her. They act more like personal bodyguards than hotel bouncers though, and seem not at all interested in enforcing the ban.

The Re-Mains are pumping out their country rock from a cramped stage bedecked with Carlton Mid flags. The music is raw, heartfelt, and has a momentum that trundles relentlessly on, like a coal train from Boggabri.

Compared to the limp, homogenised, pasteurised, easily digested music that permeates the street outside, the energy and soul emanating from this stage is a refreshing reminder that not all music at this festival has succumbed to the bland conformity that is the hallmark of modern life.

From behind a curtain of hair, lank from sweat generated by the heavy beat nailed down by a drummer with a moustache big enough to swing from, and by stage lights hung close from a low ceiling, the singer sees the banned woman and nods to her.

She stops. Her entourage piles up behind her. She flashes a smile at the singer, momentarily replacing her usual look of perpetual bewilderment with a sort of sexual charm that looks like trouble.

The woman has long red hair, very pale make-up and a reputation for hell-raising that belies her innocent pout and ‘who, me?’ eyes.

One of her number, an older man in shorts and broken sandals, speaks into her ear. She is a tall woman and leans down to him, her small eyes and mouth rounding as he speaks. She nods Yes.

He pushes roughly to the bar through a trio of loud young blokes who have wandered in from the street. They have neat haircuts and wear expensive sneakers without socks. One wears the straw cowboy hat branded with Toyota favoured by the many one-night cowboys at this festival.

The lads let the older bloke through because, despite the paunch and broken sandals, his unshaven face and glinting eyes suggest a craziness more chemical than natural, more wild than inebriated.

The band finishes the song. The singer points to the woman and introduces her as the ‘alt queen of country’. He invites her to sing. The crowd cheers and urges her to do so. She shakes her head, red curls falling over her shoulders, a blush almost making it through the heavy makeup. From that tiny mouth comes small, cracked words: ‘No. I have to rest my voice.’

She demurely puts her hand on her bosom and makes a slight bow to the band.

The singer counts in a new song.

‘I’ll take the devil by the hand,’ he sings.

The woman lurches over to one of her security guards, brusquely pushes the guard’s head to one side and bites her on the exposed neck. She then kisses where she bit, and says something to her.

The security guard reaches into a pocket and pulls out a pack of cigarettes. The two walk out onto the lonely street to smoke.

There are still people who want to engage with the world; who will not live in fear, who will not drink mid-strength beer, who are not afraid to hold hands with the devil.

Previous articleMetgasco’s coming back
Next articleBikie migration a myth: police