What your Bibb says

Victoria Cosford Is there anything lovelier than the sight and the scent of a blue lotus? It’s a flower and...
Read more

Eric Bibb has been a professional player since he was just 16, playing in the house band for his father’s television talent show. At 19 he moved to Paris, where he took up blues guitar; and a few years later he found himself in Stockholm in Sweden, which reminded him of his teenage days in Greenwich Village.

His latest offering is Jericho Road, an ambitious studio project yard in the making. It’s a thoughtful process for Bibb, whose latest offering refers to the road between Jerusalem and Jericho where the Good Samaritan stops to help a stranger.

‘I write in spurts and I usually try to make a demo of it first before I go into the studio. It came together quickly – so I have songs that I think will fit the idea of a new album and I shuffle them around and I think about how I might record them. I think about writing additional material – I start with a song I am really excited about and that ends up being the one that informs the other songs I end up writing.

‘Given all this exposure to so many cultures, I’m amazed, over and over again, at the prejudiced attitudes and the tendency to judge that linger in my own thinking. Making assumptions about people based on appearance is what we’ve all been conditioned to do, and falling into that trap is surely a big part of what keeps us in conflict with each other. Every time I catch myself going there I shake my head and hope that I’ve learned my lesson. Sometimes, the experience will lead to a new song.

‘I read a lot, and quite a few of the songs are inspired by what I read. I try to hit a blend of something linked to my personal experience and something I am observing in the bigger picture. The world is in such dire straits!’

Bibb is a passionate humanist and environmentalist who strongly believes that we are capable of change. Unlike those who believe it’s pointless, Bibb is an advocate of preaching, and then keeping on preaching to the converted. 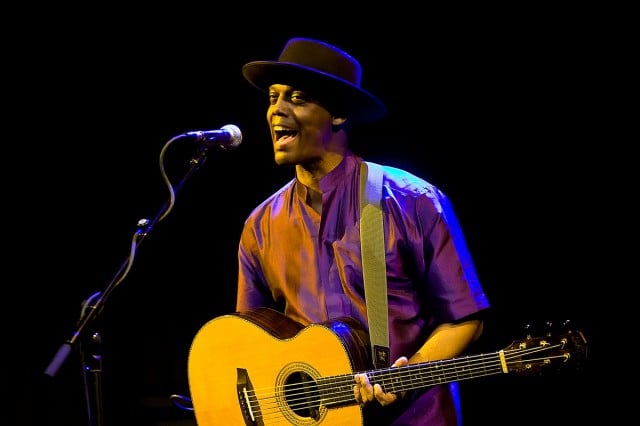 ‘I see it where I go and where I travel. People are not as complacent as you might think. And there are a lot of people on the same wavelength – it is a question of energising people who are already on board – preaching to the choir as I like to say, and keeping them motivated and encouraged and inspired to keep doing what we can, it is a critical mass situation!

‘I think there is enough stuff out there in the mass media that is cynical and violent and celebrating the brutal side of humanity, with music and art; I think it’s a matter of countering that with some sort of celebration of that other side of us and encouraging people to be different.’

Bibb is excited about coming to Bluesfest this year.

‘I am coming out for two solo gigs in Byron this year. I haven’t done that in a while, and I certainly feel this is something that some of my fans have been eager to hear.

‘I will be telling more of the stories behind the songs and concentrating on songs that are more stories that are not so dependent on the band to make their impact.’

On Saturday, November 26 Xavier Rudd plays his 88th and final show for 2022 when he opens The Green Room, a 1,500+ capacity venue on the Bluesfest site.
Read more