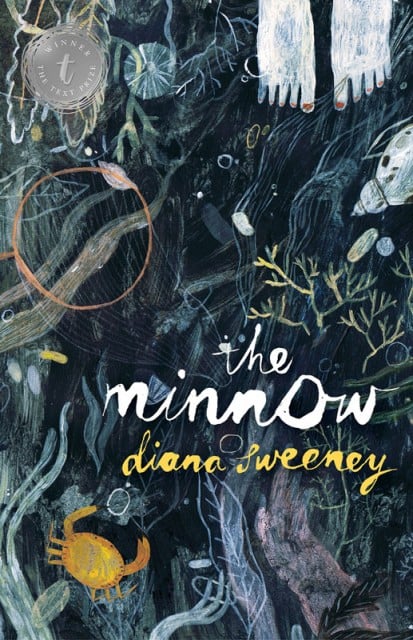 Although she has lost her immediate family, Tom is not alone. Aside from her best friend, Jonah (also orphaned by the flood), there is her beloved Nana, Nana’s friend Jonathan Whiting, Papa, the Minnow, Oscar and others.

Now I do need to explain that Papa is dead, the Minnow is an unborn child and Oscar is a fish, but those details are, in a sense, secondary to the role such characters play in Tom’s world.

Glenda Millard’s endorsement of the novel on the front cover calls it ‘Gorgeously strange and wonderfully told’.

And certainly Tom’s relationships with such a wide range of beings are part of what makes it gorgeously strange, as these characters not only occupy physical space in Tom’s reality, but offer advice and opinions that shape her understanding.

Take this exchange, for example:here is something about Tom, the narrator of Diana Sweeney’s debut novel The Minnow, that stays with you for a long time after the final page. Tom’s real name is Holly and the gender shift in name is emblematic of the instability of her world.

Tom’s younger sister, mother and father all drowned in the Mothers Day flood. At the age of fourteen she is trying to find a way through unfathomable grief and loss. But this is not a depressing or gloomy novel in any way.

As the publisher Michael Hayward noted in announcing The Minnow as the 2013 winner of the Text Prize for Young Adult and Children’s Writing, ‘It makes us understand sorrow and joy at the same time.’

It’s a cold Saturday afternoon. I’m mooching around Fielder’s Pets and Supplies. Mrs Blanket is away for the week (visiting her daugher) and Clare is looking after the shop. I am having a conversation with a seahorse called the Professor, who, it turns out, is a Buddhist. I’ve just finished telling him about the man who had the dream that lasted eighty years.

‘Fish don’t distinguish reality as separate,’ says the Professor, after thinking it over for about ten minutes. ‘In fact, it would be safe to say that we dream our reality, quite literally.’

Sweeney’s simple and spare style, characterised by short sentences and few adjectives, is well crafted. It matches Tom’s unembellished point of view and the naked reality of her situation. The structure of the novel shows a sophisticated understanding of how to engage the reader in the imaginative process of storytelling on the page.

Within the chapters the text is broken into short sections that move backwards and forwards in time and shift between dreams and reality. It is a very fluid movement and the reader is carried in different directions with the currents of the story, although it is never disorienting.

The construction of the novel is in itself an expression of the underlying theme: water. Aside from the devastating flood that carries away Tom’s sister and parents, much of the story is set in, on, under or near water. Water signifies life and death, comfort and fear. This duality is representative of the complexity of Tom’s world and her search to make sense of her circumstances.

One of Tom’s most endearing traits is her relationship with words. With a dictionary and thesaurus as constant companions her curiosity about not only the meaning of what has happened, but the ways in which we articulate meaning, is very engaging. Sweeney artfully slips in a sentence here and there showing Tom’s word obsession.

For example: ‘You’d have to be mighty serious about fishing to want a tackle box. I stop in front of the FishMaster Super Series. It comprises three layers that concertina for ease of access. It says that on the lid. I don’t usually use the word ‘comprises’, but I think it sounds just right.’ Aside from being delightfully playful, Sweeney is drawing our attention to the way stories are told, and to the choices we make in how to tell them.

I found The Minnow a pleasure to read and a remarkably accomplished first novel. Although it is marketed as Young Adult Fiction, I would recommend it to readers of any age. I’m very much looking forward to meeting Diana Sweeney at this year’s Byron Bay Writers Festival.

* Laurel Cohn will be chairing a session at the Byron Bay Writers Festival with Diana Sweeney and other Young Adult fiction writers.

’They say every hero has to leave home, but what those first steps are like I’m yet to know,’ reads the first line of Jessie Cole’s second novel, Deeper Water.
Read more
The Echo is made possible by the support of all of our advertisers.