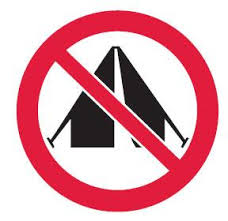 The ten people, nine of whom pleaded guilty, were fined a combined total of $5,350, including court costs for illegally camping in Byron Bay during the busy Christmas-New Year break.

Six of them, from south east Queensland, were found together by council staff illegally camping overnight in Border Street, Belongil.

One of the men in this group failed to appear in court and was fined $700, including costs.

Another three were German visitors who were found illegally camping overnight near the site of the Byron Community Markets.

A tenth person was also found illegally camping overnight by Council staff in Border Street, Belongil, while an 11th pleaded not guilty to overnight camping and will face Court again on 7 April.

‘With close to 1.5 million visitors annually, Council and the community welcome tourism as a vital part of the Shire’s economy.

‘At the same time, we need to get the balance right by working to ensure that tourism maximises benefit for the community and does not disrupt town amenity.’

‘These latest judgments in the local court provide further evidence that illegal camping is simply not worth it.

‘For the minimal cost to visitors coming by vehicle to stay in one of the shire’s many quality camping grounds, not only will they do the right thing by the Byron shire and respect the community they are temporarily a part of, but they will potentially avoid a fine worth many more times the cost of staying lawfully.

‘Yesterday was a strong deterrence message and I have no doubt that it will spread quickly via word of mouth amongst potential street campers,’ he said.

Mr James also noted that visitors who camp illegally overnight and who also create noise or damage the environment by littering, faced the prospect of even larger fines.

‘Council’s interpretation of the court’s decisions on Thursday is that matters such as loud noise and leaving waste could be regarded as aggravating factors when determining an appropriate penalty,’ he said.

Mr James said council would continue to work with the community to reduce the rate of illegal overnight camping.

‘Council has worked with the community to reduce the frequency of illegal overnight camping in the Byron Shire by responding to resident complaints.

‘We thank the community for its support and will continue to work to ensure amenity is protected’.

Mr James also assured the community that people who are homeless, or for some other reason may be sleeping in their car, are not targeted when officers are regulating illegal street camping.

Previous articleDo the Hokey Pokey at Blues
Next articleMandy Nolan’s Soap Box #179: Fat and ugly with something to say