Will Alan Jones be the champion for wind and solar energy?

James McKenzie is running as an ungrouped candidate running in the upcoming Tweed Council election and is from Eungella.
Read more

It’s not easy being green, it never has been, but we are proud of our long-term commitment to Greens...
Read more 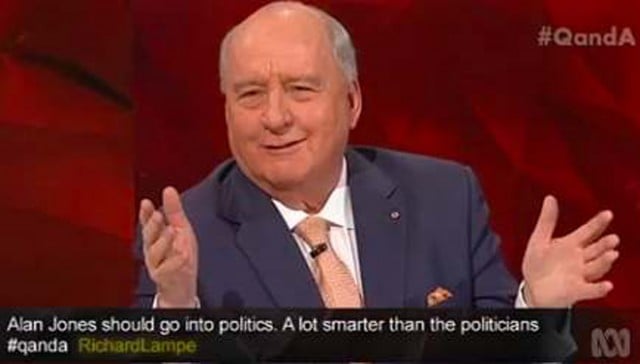 One of the big problems for the wind and solar industries in Australia over the last few years has been the absence of a public champion for renewable energy.

Sure, it’s had great support from the Greens, and Labor, and even the Coalition before the election of Tony Abbott, but there’s been no public figure who has galvanised the population.

What if that person turned out to be Alan Jones?

Yes, Alan Jones. The radio shock jock deemed to have political views somewhere to the right of Genghis Khan; He who wanted Julia Gillard dumped in a chaff bag and thrown to sea; He who fronted a virulent anti-wind rally in Canberra, and who ridicules solar with his pronunciation – solarrrr; and He who elicits extraordinary comments from leading politicians, such as the ‘wind farms are offensive’ remark from Treasurer Joe Hockey, and the ‘wind farms are ugly’ and other, way too numerous comments from Prime Minister Tony Abbott.

All this aside, there are several good reasons why Jones could be the man for the job. For a start he is eloquent, influential, and has a tremendous command of figures and data. He has led an extraordinarily successful campaign against coal seam gas – a campaign that helped topple the LNP Premier in Queensland, Campbell Newman, and has now turned his sights on coal mining in agricultural regions.

There he was on ABC TV’s now controversial Q&A program on Monday night, holding forth about the absurd idea to approve the Shenhua Watermark coal mine in the Liverpool Plains. The disturbance area, he said, was 14 times bigger than the city of London, 1.5 times bigger than the City of Sydney, and equivalent to 4,600 football field.

Just imagine if Jones applied that same passion and rigour about data to the renewable energy industry. All he’d need to do would be to get his wind and solar facts right, and he’d be off.

On Monday night, on Q&A, and on many occasions before, he showed just how wrong his numbers are on renewables, a fact-check failing that has similarly influenced his views on the science of climate change.

He said that coal-fired electricity costs $79/kWh, and wind was 20 times as much, at $1,502/kWh. Goodness knows where he got those figures from. To borrow Jones’ dismissal of Tim Fisher,  he was ‘talking a lot of rubbish without reading the information’.

For a start, Jones must have confused kilowatt hours with megawatt hours. Coal is produced by existing generators – built years ago with government money and fully depreciated – at anything from $20/MWh to $45/MWh. Wind, built mostly with private money, costs around $80/MWh.

But if new-build wind – and for that matter, new-build solar – was pitched against new-build coal, as it is in Latin America, the Middle East, and even in northern Queensland, where a proposed 600MW wind farm and 600MW solar plant is competing with a coal-fired generator for government finance – then the equation is a lot different. Wind and solar are cheaper than new build coal. Even in the US wind is considered to be the cheapest new-build generation.

For consumers, Jones’ prime audience, solar already wins the day. It costs around 11c/kWh to produce (just ask Origin Energy, that’s the selling price for the output from rooftop solar panels they are installing), while consumers saddled with the over-investment in the grid are being charged 30c/kWh or more for predominantly coal based power.

Jones likes to project that fact that he is a champion of the underdog and of protecting consumers, and their rights, notwithstanding his sponsorship from big corporates.

This is the underlying philosophy of the right-wing Tea Party movement in the US, and one of the reasons why influential elements of that organisation have embraced solar, to the point where they have been dubbed the Green Tea Party.

Indeed, Debbie Dooley, one of the organisers of the first nationwide Tea Party protests, in 2009, now co-sponsors a movement called the Green Tea Coalition, with the help of environmental NGOs such as the Sierra Club, which are battling fossil fuel astro-turf and lobbying groups over solar policies.

‘I thought that the regulated monopoly in Georgia had far too much power,’ Dooley told the New Yorker in an interview recently. ’They had begun to look out for the best interests of their stockholders instead of their utility customers.’

Solar, she said, promised to give people energy autonomy. ‘The average person cannot build a power plant, but they can install solar panels on their rooftop, and they should be able to sell that energy to friends and neighbors if they wish.’

That is exactly the same issue being faced in Australia, and exactly the cause that Jones should be taking up.

The industry, and the consumers, Jones’ own listeners, understand this. At the height of his, the Murdoch media’s and the Coalition’s railing against the carbon tax because of its supposed impact on electricity prices, the solar sector deliberately targeted News Ltd papers and talk-back radio for their advertising campaign.

They understood that the sector of the market most disturbed by rising prices would be quick to seize on a technology that could help reduce those prices. That technology is rooftop solar, about to be joined by battery storage, in a development that will tip the balance of power from the world’s most powerful industry, to consumers.

Over the coming years, the rights of those consumers, pitched against a range of powerful vested interests looking to slow down the transition, will be a critical event. Just like farmers versus coal and CSG. You could hardly imagine a better cause for Jones to champion.

Footnote: One extraordinary comment on Q&A on Monday night came from former LNP leader Tim Fisher, who suggested a giant railway bridge ‘across the Brindabellas’ – whatever that might mean – with wind turbines between the spans and trains running across the top.

Quite a flight of fancy. We think Fisher might have gotten this idea from an Italian proposal to do this (see picture below) to a viaduct, adding both wind turbines and solar panels.

The idea never got up. But if Fisher is talking about bridges across the Brindabellas (which surround Canberra), then perhaps he means Parliament House.

We couldn’t think of a better location, and it already has a flagpole which would be a perfect position for a single turbine, of the sort that so upset Abbott during his Rottnest holiday a few years ago.