Mandy Nolan’s Soap Box: Who made your clothes? 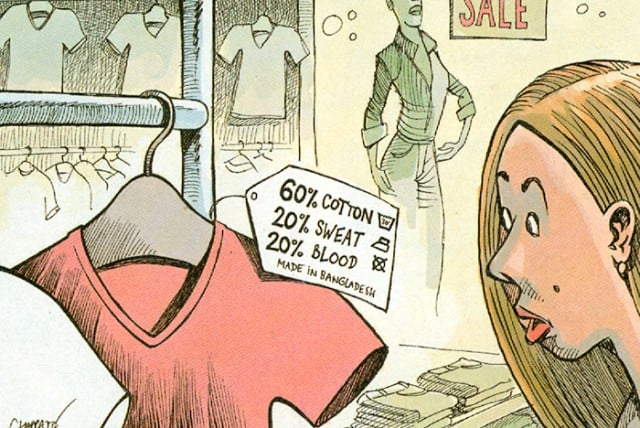 I don’t like to think about who makes my clothes. I am sitting here in my $9 one-shoulder dress I bought online. I was so impressed with the price I bought three. That’s right – I got three frocks for $27 and I didn’t even have to leave the house.

The woman who made this dress probably doesn’t even have a house. You couldn’t make a dress like this in Australia for $9. My kids’ daily canteen budget is $10. How can fabric and labour cost $9? It’s actually not possible. If the dress could be sewn in one minute and the fabric were bought at 50c, then perhaps. But even then no Australian worker is going to be putting out 60 frocks an hour.

No, my cheap dress was clearly made in the third world. My fat affluent arse now touches the same fabric handled by some poor Chinese garment worker squatting beside her overlocker in the kitchen with her baby close by. She gets paid by the piece. There is an enormous pile of nylon one-shoulder dress cutouts in a box in the corner that she pulls out and feeds through her machine.

Part of her wonders why rich western women would only want to wear a dress with one sleeve. She thinks rich women must be stupid. Or perhaps these dresses are for rich one-armed women? This makes her feel more purpose in her work. It’s 1am and she’s been at her machine for 12 hours when she sews my dress… you see when I think like that I can’t wear my $9 dress. That sense of ‘I nailed it on eBay with a bargain’ pride just floats out the window and is replaced by ‘I am part of a greedy capitalist economy that forces women and children into unsafe and unregulated work practices’.

I am the oppressor. Now my $9 frock feels ugly. It feels like murder. Like it was complicit to the death of 117 people in that Dhaka factory fire in Bangladesh. Caused by an electrical short-circuit, that fire started on the ground floor and trapped workers for nine floors above. The large amount of fabric meant the fire spread quickly and was hard to contain. The fire burned for more than 17 hours before it was extinguished. The building lacked adequate emergency exits so the workers basically were trapped in the burning factory awaiting their death.

This is how places like Walmart make their profit. When you really think about this, it’s hard to buy that $3 t-shirt from Kmart without a sense that your child’s t-shirt was probably made by a child. Interestingly it’s not that we don’t know this. Employment conditions for overseas garment workers are well known. We know that children stitch our brand-name runners. We’re happy to produce goods in Indonesia if the profit margin is greater, with many of us here more than happy to use places like Bali as our sewing room.

There’s nothing like taking advantage of a third-world economy to up your first-world profits. From an economic rationalist point of view, it’s hard to look past the profit margins once you have established the third world makes a great factory. The main thing is to try not to think of those people as actual people. Those children sewing your undies, they aren’t like your children… they aren’t special.

It seems a bit harsh for those of us wishing to escape the blame, but every time we buy something made with suffering, we have bought into our smug profit-driven first-world superiority. So why do ethical people have a blind spot when it comes to fashion? And why is there so little pressure on the fashion industry to take responsibility?

Earlier this year I met an extraordinary young woman of just 16 who had been so affected by the fire in Bangladesh that she researched factory conditions at the places where she bought her clothes. Then she stopped buying anything exploitative. She founded a company called Who Made Your Pants? – an ethical underwear company in the UK run by women for women. I was so impressed that someone so young could change her behaviour. I wondered then why someone as informed and as intelligent as I am couldn’t.

Interested in finding out more? The True Cost, a film about who makes your clothes, is being screened at The Secret Garden (121 Jonson St, Byron) on Thursday at 6pm.