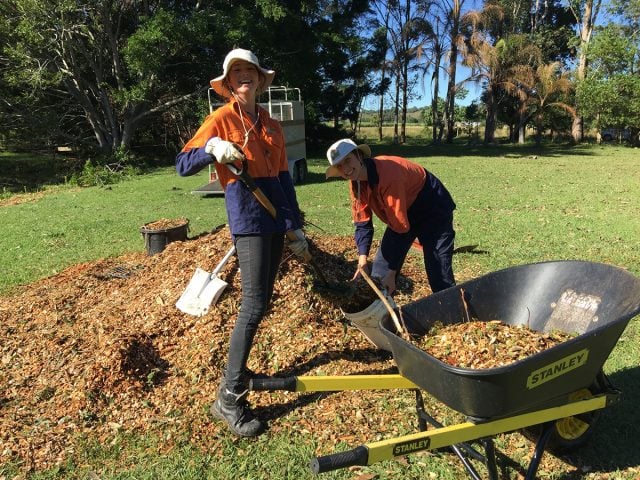 As the rain came and went creating perfect planting conditions plenty of people turned up at Durrumbul Hall on Sunday for the Mothers Day tree planting sponsored by the Mullum Music Festival.

Aiming to plant a thousand trees Jo Green, Byron councils natural habitat officer, said they had to plant all the spares as people kept arriving and were keen to keep getting the plants in the ground.

‘We planted 1042 trees in total. We had people coming from as far as Lismore who had been to the first planting and wanted to continue to be part of it,’ she continued.

While kids claimed the right to be Queen and King of the castle on the mulch piles and painted rocks there was plenty of community spirit to get in and get your hands dirty and plant throughout the morning.

‘It is about the community coming together and working together, that’s when you really achieve something.

‘This planting will create beautiful grounds for the hall as well as creating a natural corridor to the surrounding bush areas.’

The planting was accompanied by the delightful tones and lyrics of Andrew Morris and Aine Tyrrell also provided by the Mullum Music Festival.

‘This is the seventh planting so we will have planted around 7000 trees in a range of sites around the Byron shire,’ said Glenn Wright, director of the Mullum Music Festival.

The Mullum Music Festival planting at the Mullumbimby show ground three years ago focussed on the threatened brush sauropod. This area has now received funding as part of the state governments saving our species as the area.

‘We now take people around this area to show them how successful regeneration can be,’ said Jo.

Monday morning saw the arrival of John McVicar and his green army to sort out the fencing and finish off the mulching around the trees.

‘This is the best job we’ve ever had,’ said green army workers Shoshina Newman and Caitlin O’Conner.

‘It has been such a good program,’ continued Caitlin.

‘I’ve learnt so much from first aid and the chemical cert to plant identification, grafting, cutting and practical bush regeneration.

‘There is a real need for young people to plant trees and that’s how we are going to save the world.

‘I don’t know what to do next now that it has been cut in the budget.’

Green army supervisor, John McVicar, said he was really disappointed that the Greens had not supported the project and said that it wasn’t green.

‘The budget has cut the $350m that was for the green army and have replaced it with $100m for Landcare. But they have not put anything more into environmental funds.

‘All Landcare groups will still be struggling. It is not a good environmental outcome.

‘The green army is an opt in program and even for people who were not that keen they start to get educated about the environment and begin to take pride in the work they do and their local environment.