Dear teachers and community members. I have recently received an email from within my school community that asks me...
Read more

There is much being said about the pros and cons of the vaccination. Do we? Don’t we? Must we? Must...
Read more

No Ballina commemoration for 11 November

Speaking on behalf of the Ballina RSL sub-branch, Dick Wills BEM has announced that there will be no public commemoration service in Ballina for Remembrance Day next month.
Read more Mercy-Mercy have their own style of rock blues with a fresh vibrant sound that is both tough and sensitive. Lead singer Lindy Lou Smith has a great feel for the blues whether she is interpreting Etta James, Nina Simone or Beth Hart. Neil Jeffs has more ‘feel’ in his little finger than many guitarists have in their whole body. He is the classic bluesman and his solos don’t waste notes.

The rhythm section of Jim Lieschke and John De Laurence has been around and playing together almost since Adam was a boy and it shows in their instinctive feel for each other’s playing. Catch this fun and formidable outfit at the Lennox Point Hotel on Friday and Sunday at the Rails. Honouring that old-school Motown sound and working it into something of their very own, The Teskey Brothers take their debut album Half Mile Harvest on tour this July, with a stop at Brunswick Picture House! They nailed it at Bello Winter Music last week, so if you missed out, then here’s your chance to experience what everyone has been raving about. Sam and Josh Teskey discovered American soul music of the 1960s via their parents’ record collection and were immediately taken.

As teenagers, the two brothers picked and sang night after night in the bungalow behind their family home on the outskirts of Melbourne, devouring the R&B songbook and absorbing the tricks of the blues trade. In their obsession, the pair became accomplished players and soon began writing originals, a process that came naturally to both of them. Sam and Josh then joined with Liam Gough (drums) and Brendon Love (bass) to form The Teskey Brothers. See them at the Brunswick Picture House on Saturday at 7pm. Tickets $27/23 at brunswickpicturehouse.com. Multi-award-winning singer/songwriter, Kellie Knight and her 7-piece jazz/funk ensemble, The Daze, are playing at the iconic Byron Bay live music venue, The Rails, on Saturday at 7pm. Expect to hit the dance floor with their unique blend of soul, funk and jazz, with an early set of favourite funked-up jazz standards. Picking up awards for three of the five tracks from debut EP Twisted, the northern New South Wales outfit have brought their music to Australia’s world-renowned festival stages, including Bluesfest, Adelaide Fringe and Woodford Folk festivals.

This Sunday grab your four-stringed friend and join Miss Amber ’n’ Stu ’n’ Rod for a uke jam at the Poinciana in Mullumbimby. The trio will be performing some tunes and you are invited come and strum along. There will be a songbook ready next week for download. At the Poinciana Cafe in Mullumbimby on Sunday from 2pm. 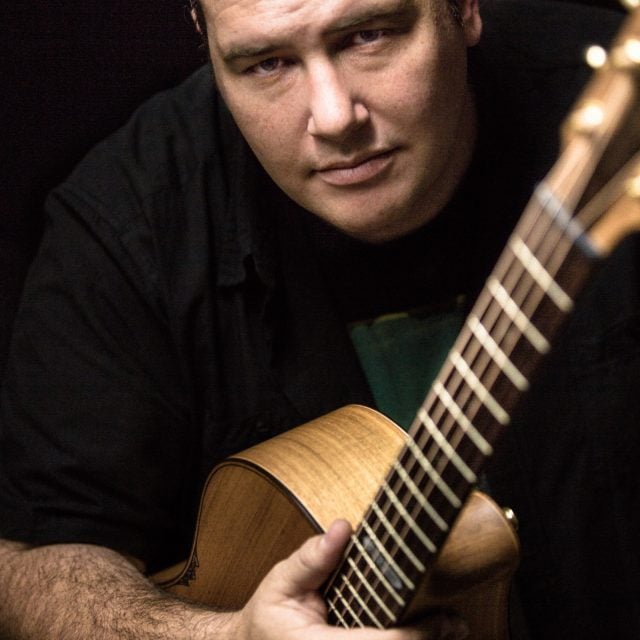 Australian blues master and acoustic guitarist extraordinaire Lloyd Spiegel is delighted to announce the release of his ninth album This Time Tomorrow, and is headed on an extensive tour to celebrate. This Time Tomorrow was written as Lloyd travelled through Europe, Central and North America, and delivers driving rhythms that return Spiegel to his gut-bucket blues roots. Shady and colourful characters spread out over continents and decades, through places forgotten and familiar. Lloyd plays Mullumbimby Ex-Services on Friday 21 July at 8pm.$25 tickets from https://www.stickytickets.com.au/52272 Bay Collective Sessions are back at the Brewery this Friday to deliver their monthly dose of live music. To kick off the funk are local legends This is Living, a new project from the guys behind one of Byron’s favourite party bands, Drop Legs.

A funk night in Byron wouldn’t be complete without a set from local bass master Fergo. With a 5-octave vocal range that could melt butter, bass grooves like no other, and a love for soul, Fergo and his band The Burden will take you on a musical journey. From warm low ‘Barry White’ tones to soaring ‘Jeff Buckley’ highs, this bunch of talented musicians are not to be missed.

Get down and get funked at The Byron Bay Brewery this Friday from 7.30pm, free entry. Kirk Lorange and Michel Rose are two of Australia’s most iconic guitarists and they will be playing with Greg Lyon and the Hip Operation this Sunday.

Michel Rose is the king of pedal steel, a member of the Country Music Hall of Fame, and has worked with an amazing array of artists in the country, jazz and popular music fields. Canadian-born Kirk Lorange is a master of the slide guitar, singer and songwriter, and is known for his work with Chasin’ the Train, Richard Clapton and many others.

They’ll be joined by Greg Lyon (bass, vocal) and Scott Hills (drums). The music is country-soul, blues and boogie, with music by Little Feat, Ry Cooder, BB King, Ray Charles and others.

The monthly Sunday Groove Sessions at the Byron Golf Club have become a favourite hangout for music-loving locals and musos. Guests often drop in for a few songs. Entry is free, music 2–5pm. Ever since the collaborative effort during the Save the Heart of Federal campaign, the Federal community has been going from strength to strength. Federal reached out to the broader community to help Save our Heart and we appreciated the help. FedRocks is a night that continues that support while at the same time you can have a rocking good time… just what the Hall was saved for! At previous gigs we have featured Tex Perkins, the legendary Feramones, The Jesse Morris Band, Dan Hannaford and heaps of others.

A full hall of friends, music, dance, food, drinks and good times created a brilliant event every time. This year there will be no exception with two great bands: The Round Mountain Girls supported by Burning Hands – both bound to get you up on the dance floor. Kat Cooper’s acoustic country folk vibes will be up early to ease and accompany dinner.

There’ll be a licensed bar and a delicious dinner from Chef Cam. Saturday from 6.30pm at Federal Hall. Tickets at the door for $25 with food and bar available. All enquiries phone Alan 6684 9313 or visit jaspercornerfederal.com.au.

Beach users in Lennox Head are reporting much higher numbers of 4WDs on Seven Mile Beach recently, along with an increase in hooning behaviour. Since...
Read more
The Echo is made possible by the support of all of our advertisers.