Nothing pleases Alex and Revital Lev more than seeing their creations being worn by people having fun on a festival dance floor or walking around town.

After 15 years trading in the competitive Byron Bay market, the pair has firmly established themselves as trendsetters with their store, Fairy Floss.

The store itself is more than just a clothing shop. It is like a gallery, capturing the magical and creative qualities of Byron Bay, with its unique range of clothing and accessories displayed with a loving attention to detail.

‘Ours is one of the longest standing shops in the Bay,’ Alex said.

‘We have been creating unique, original designs and style for many years now and we strive to deliver good quality.

‘As an underground fashion, our aim is to create unique, tribal and durable collections every season. As opposed to mainstream fashion, Fairy Floss and Pixie King garments are created to last, both in style and in quality.

‘People come in and say, “Wow, I’ve never seen anything like that before”, which is how Byron itself used to be before the chain stores moved in.’ Alex designs the men’s range and his partner Revital, who is a professional fashion designer, does the women and kids, and finishes off the entire collection.

‘The fabrics are mostly stretchy cottons that will flatter any form. We also use leather, lace, frills, prints, studs, cuts and special washes to create that time worn look.

‘Our inspiration is Mother Nature, the Byron lifestyle, the festivals around Australia, conscious living, and life itself.

‘The last five or six years have been influenced by Steampunk. Six year ago nobody thought that Steampunk would get so big but we were already influenced by it.

‘But our latest Summer collection is influenced by Naturepunk, which is a fusion of natural elements like feathers, bones, leaves, together with the punk style of things, which is the ribs, the cuts, the studs and the unfinished edges.

‘Punk is also about taking something familiar or old, and transforming it to a new creation, to something that is on the edge of what we want to express.’

Alex said apart from the boutique shop in Byron Bay, he and Revital enjoyed setting up their stall at festivals like Woodford, Bluesfest, Rainbow Serpent, EarthFreq … mostly electronic but some organic festivals too.

‘It’s a nice way to get in touch with our clientele … the people who are wearing what we produce’, he said.

‘We have an online presence too, www.fairyflossbyronbay.com, for those traveling or overseas punters that are hooked on our style.

‘We’ve had a great feedback and support from the locals over the years and seeing Fairy Floss become a Byronian icon makes us very proud and grateful.

‘Especially now as Byron undergoes yet another change in the cooperative direction, and independent boutiques like ours find it harder to survive.

‘Being long time locals ourselves we wish to thank all our supporters for their ongoing support and kindness.

‘You are making it all possible.’ 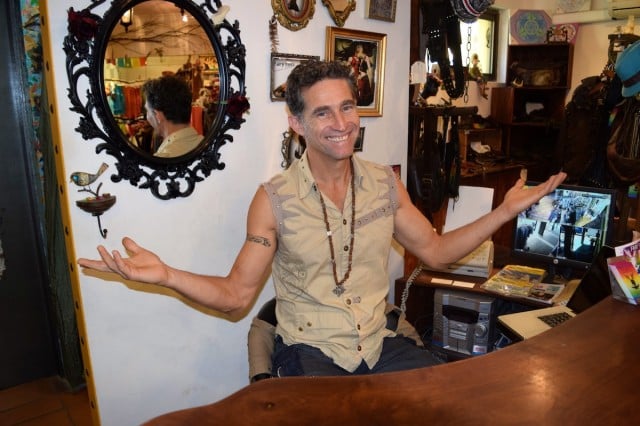