Lennox Head very happy to have its community market back

In spite of the unpredictable weather and COVID situation, Lennox Community Market was buzzing on the weekend, returning to Williams Reserve under new management after almost two years away.
Read more

Southern Cross University has received more than $1.94 million in government funding for innovative research at the institution.
Read more

In fact, I think it would also be true to say that you don’t really know a person until you have lived with them and, for many of us, shared accommodation was the place where lasting relationships have been both formed and destroyed.

Topology are the ensemble in residence at the Brisbane Powerhouse and since their beginning in 1997 have released eleven albums, performed award-winning concert series, and have embarked on world tours. Topology are innovators, and have come up with a unique way to tell the story of five characters living in a share house – through music. All music. The story is told without words.

According to Christa, this isn’t just a musical composition.

‘We think of it as theatre and dance; the music does tell the story. It’s not overt, and of course there are no words. An audience member said it was a live-action silent film without its being, of course, film. The music tells the story – you get all the emotion and the story from the music, so you choose your own emotional reactions and the music guides that.’ 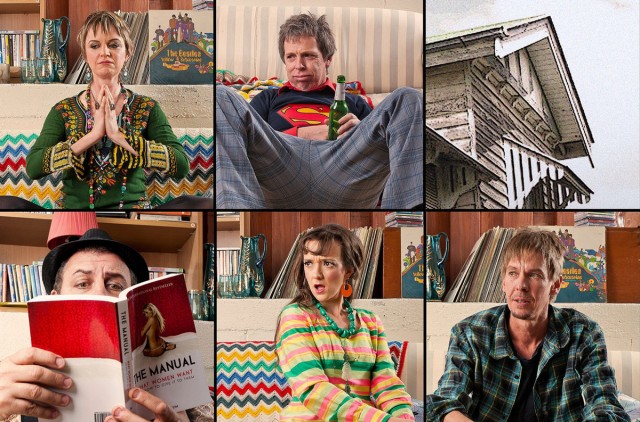 For an ensemble who work closely together, it wasn’t hard to create characters, especially when you were brave enough to use your own character defects as your template.

‘There are five characters and Topology have been together 17 years,’ says Christa. ‘In the story we have been living together for the same time, and we’ve created characters based on ourselves; we are co-dependent and haven’t been able to move on. We’re in our 40s but behave like we are in our 20s. Rob, who is the master of double entendre, can’t find a job; he works on the tollway, and he is terrible with women. Therese is the house hippy, yet she secretly eats meat; and she is a bit desperate so has a crack one night at Bernard, who is oblivious to everyone and who drinks and smokes and accidentally sets the house on fire when he falls asleep and the cigarette burns the house to the ground. John, who writes music, and is secretly in love with me. I am a fashionista who takes no notice of John because I am obsessed with my shoes… there’s an eviction, a real estate agent (the sound man) who evicts us – and there’s a fire!’

So what was the impetus for Topology to create an instrumental opera set loosely in the 70s?

‘We have always thought of getting away from dots on the page, away from the traditional way of performing chamber music. We wanted to take one step forward and communicate. We felt that straight chamber music wasn’t always the best way to communicate.’

When it comes to genre, Topology sits outside the box.

‘Genre has been a problem for us the whole time because no-one can pigeonhole us!’ says Christa.

The show is directed by Annie Lee, of the Kransky sisters, so it’s no doubt that this is an extraordinary show where innovation collides head-on with sensational music and humour.

‘The share-house concept resonated better than I thought,’ says Christa of the first few shows in Brisbane. ‘When I came out of the theatre, people came out and were raving about how hysterical it was.’

So how do musicians manage to tell a story of share housing without speaking – and be funny?

In Share House the couch is the centrepiece of the action.

‘In one scene I am lying over the back of the couch with my head falling behind the couch, and playing like that is really hard. I think for audiences though that you look beyond the playing, you get caught up in the story where you look past it.’

For Share House, Topology have developed yet another suite of intriguing collaborative relationships, this time a unique cross-cultural and mixed-media collaboration celebrating the works of ten incredibly diverse artists from Brisbane and the Philippines to create artwork inspired by music from the album. The artists were given individual tracks to inspire artworks in their chosen medium, and the results are diverse, from painting and sculpture to tattoo design and jewellery.

Further expanding on the community spirit of a share house, the commissioned artworks will be auctioned off with 100 per cent of proceeds going to Habitat For Humanity Philippines to rebuild homes devastated by the recent Typhoon Haiyan, while fans of Topology’s creative canon will find recreations of the individual pieces within the album sleeve of Share House.

Share House is on stage this Saturday at the Byron Community Centre. 7pm.

Tix at the venue or through
Ku Promotions. For those interested in participating in a ‘Demystifying the Creative Process’ workshop from 10am till 1pm with Byron Bay Artists Burg and ASIO alongside Topology, go to kupromotions.com.au and select ‘current events’.