Danny Wakil demonstrates as much knowledge of the facts on the ground in Palestine/Israel as a duck knows of...
Read more

Much has changed in the quarter-century since the ‘Sausage King’ opened up shop 25 years ago. In addition to the butcher and the Tavern (see stories opposite), Ocean Shores Shopping Centre now boasts nine food- and drink-based businesses. Here’s a snippet on each. A pharmacy wouldn’t usually feature in The Good Life but John Geddes Pharmacy is no ordinary chemist. For 16 years, they have combined modern with traditional medicine and consider food one part of the latter. In addition to having a Herbalist (James) and Naturopath (Paul) there most days, Tibby is known as a ‘Food Guru’. The shop stocks a range of bulk foods as well as bread, honey and packaged teas and spices. Phone 6680 1252. 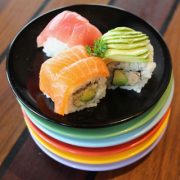 The name for Sabi Sushi is derived from ‘wabi-sabi’, a key Japanese concept of aesthetics stemming from their ancient tea culture. The store has a beautiful aesthetic, with wooden tables and benches from which to choose on the sushi train, and watch the chefs prepare the next round. Local sourcing is key for the business, with coffee from Moonshine, Byron Brownies, and seafood from Bay Seafood. Outside, phone 6680 2346. The Tide is Turning:

Tides Café recently changed hands. New owner Winter Selek plans to continue to offer the burgers (‘they have such a following,’ she says). In addition, she will introduce food from her Greek / Turkish origins. My Sister’s Kitchen, the planned new name, will focus on share platters and will showcase other female chefs. Outside, phone 6680 2346. Food Culture is a new bulk and wholefoods store that opened just over a month ago.

Four local families have banded together with the aim of making healthy living affordable to all. ‘It’s been a group effort,’ says Samidha Mayfield, a chef who is one of the team that includes an architect (who designed the light-filled shop) and youth, community and disability workers. ‘We are aiming for zero waste and plan to add bulk refrigerated items, like kombucha on tap.’ Outside, next to Tides/My Sister’s Kitchen, open 7 days. Facebook: /foodculturebulkfoods Business partners Anna Steele and Pierre Sauvere are celebrating three years of owning GaGa Central, bought after both worked for the previous owner. Good coffee is also a speciality, as are juices and smoothies. GaGa has one section dedicated to pizza and the rest has a surprisingly large array of foods, including dips, cakes, sandwiches and pastry rolls. ‘We have a big range of healthy treats,’ says Anna before adding: ‘But then we also have baklava, which is full of sugar, flour and nuts!’. And they deliver – pizza, dessert and drink deliveries available within Ocean Shores, Billinudgel and Brunswick Heads. Inside, open 8am–8pm 7 days. Phone 6680 1312. Celebrating 15 years in business this year, Ocean Shores Bakery would like to thank their loyal local customers, of whom there was a steady flow while I visited. Baker Brad Trivett and his mum, Dianne, are the mainstays of the business, which also employs three apprentices and one other qualified baker. Everything you see instore is made on the premises, including Brad’s sourdough loaves. Outside, Open 7 days from 5am (to 5pm weekdays and 3/2pm on weekends). Phone 6680 1822.

Cobba Corn is a great option for fresh fruit and veges, especially as they have a strong emphasis on sourcing locally. Less obvious are their supplies of legumes and spices, including amchur powder, chat masala and black cardamon. Inside, open seven days. Phone 6680 3944.

Time for a tipple?:

Ocean Shores boasts two bottle shops – Cellarbrations (inside the centre) and Bottlemart (next to the Tavern). If you are the sort of person who likes to share your custom around different local businesses, you need not worry – both are owned by the same team that own the Tavern. This doesn’t mean they are the same though. Adam Berger, one of the three owners, encourages people to compare prices. ‘Because they are different banner groups, they have different prices on everyday items as well as different specials.’

Previous articleChefs at 20 paces
Next articleGort triumphs on Mullum court

The potential rivalry of their youth now has a chance to come to the fore at the ‘Battle of the Chefs’ dinner this coming Monday night. Diners will be the judges – each tasting and scoring eight dishes (each chef prepares four half-portion serves) to determine a winner.
Read more

Where does a butcher take his annual holiday? At the Australian Meat Industry Council’s National competition, of course.
Read more