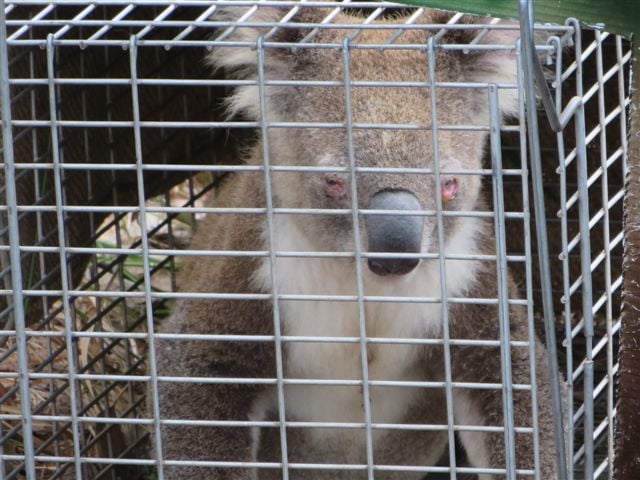 One of the estimated 144 remaining koalas on the Tweed Coast (pictured) was recently captured by Friends of the Koala volunteers Jo Cabale and Sue Johnson.

His pink swollen eyes are a tell-tale sign that he is suffering from Chlamydia, a disease common in stressed koalas which causes pneumonia, infertility, blindness and ultimately death.

The six-year-old male koala (in his prime) was found in a tree on the edge of the Black Rocks sports field access road, very close to daytime on-ground koala breeding activity that was observed in November 2013. (He was not one of the three koalas breeding on that day.)

He was transported to the Currumbin Wildlife Hospital, where he is receiving a long-term course of antibiotics.

Ms Johnson said the koala was more fortunate than most and has a good chance of recovery from such a debilitating disease.

She said Chlamydia can’t be eradicated but it can be managed if we get it early enough. It’s highly contagious in the koala population, and many animals go untreated.

‘If we don’t urgently look at ways to identify and treat affected koalas, and to minimise the stress factors which trigger this disease, we can kiss goodbye to our Tweed Coast koalas,; said Ms Johnson.

Ms Cabale said the only way to save koalas from extinction was to ensure their safety and capability to breed.

Koala Land (a Koala Research Collaboration Project commissioned by Dreamworld Australia) states that up to 70 per cent of koalas in the wild have been living with Chlamydia for quite some time.

However, the symptoms of the disease only manifest when koalas become stressed and their immune systems are compromised.

Team Koala member David Norris believes that the captured koala’s ill health is directly attributable to the stress associated with the many activities occurring at the Black Rocks sports field site.

‘Considering that the sports field is located 300 metres into the bushland, these impactive activities are compromising connectivity within the koala corridor,’ he said.

The research carried out by Koala Land concludes that Chlamydia becomes rampant when koalas’ home ranges are isolated due to loss of corridor connectivity, which results in inbreeding.

This makes them more prone to deformities, disease and cessation of reproduction.

The Black Rocks sports field site is in a key location within the Pottsville Wetland/Wooyung wildlife corridor.

Mr Norris said ‘now that the site has been recognised as a koala breeding hub, it’s time to consider other more appropriate uses for the Black Rocks sports field. Let’s provide the safe sanctuary the koalas so desperately need.’

Not only koalas will benefit from Phil’s tree planting

Round Mountain property owner Phil Weinthal believes the success of his involvement in a local koala tree-planting program will not be limited to the return of the beloved marsupials.
Read more

Will Cr Reece Byrnes ‘be responsible for the death of the Pottsville koalas?’

Almost 400 people showed up in support of the koalas and moving the Men's Shed to a better site. The Pottsville concerts is being hailed as a success but it may all come down to the vote of Cr Reece Byrnes.
Read more

Dave Norris, Pottsville. This week another Pottsville Wetlands koala was euthanased with symptoms of stress-related disease. This is one of three euthanased in the past three months in an area where some local residents have indicated they believe koalas are happy in the presence of humans and their dogs.
Read more
The Echo is made possible by the support of all of our advertisers and is brought to you by this week's sponsor, Enspire Furniture & Homewares Ballina.