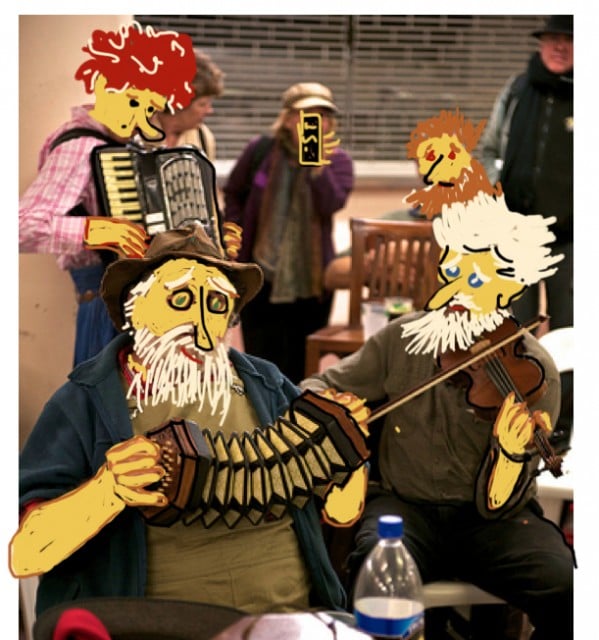 But then again, the National Folk Festival in Canberra is not noted for its all-in sexual activities. Besides, it’s too bloody cold. It’s freezing.

I bought an ice-cream in a cone yesterday from one of the festival stalls. I still have it. It’s harder than when I bought it. I could use it as a tent peg. I haven’t eaten it because my tongue stuck to it and it took two glasses of mulled wine to unstick it.

It’s definitely too cold to expose skin – except if you’re a teenage Canberra girl cruising the festival with your friends. Then you wear a fluffy jacket, beanie, gloves (with smartphone attached) – and a short skirt that leaves your legs fully exposed to the Antarctic elements. I guess sometimes you have to freeze to be cool.

The human contact here is definitely not orgiastic in a physical way, though it is person-to-person and non-virtual. It’s social. And there’s plenty of it.

People turn off their television, emails and central heating, grab their funny festival hat, dust off their accordion retrieved from the garage, and come here to make contact with their tribe.

They talk to each other (using mouths not fingers). They smile at passers-by. They applaud street performers. They laugh at Morris dancers. They walk with volunteers pulling wheelie bins and discuss recycling.

People sit in front of a stage, not a screen. Then after the gig they have a Guinness with the performer and talk about his Appalachian guitar technique. And the cold. And the crazy Canberran teenagers.

No-one is lying to your face. There’s not a suit and tie to be seen. Politicians don’t come here.

Here, there are musicians, dancers, poets, jugglers, painters, parents, butchers, bakers and and candlestick makers. It’s a celebration of humanity. It shows that people together are peaceful, caring, inclusive and creative.

But then there’s the Session Bar… I have a confession to make: I don’t really like traditional folk music. I don’t like Irish jigs and reels. I call it diddly music. Because it goes diddly, diddly, diddly, diddly. Over and over again.

It’s like there’s one song that a drunk Irish bloke wrote a hundred years ago and everyone who has a fiddle or banjo or accordion knows that song.

Musos come and go; empty glasses stack ever higher; morning comes, then evening, then morning again; beards grow; the banjo player passes out; children are born – and still the song goes on. And on. Diddly, diddly, diddly, diddly. Oh dear…

Normally I’m not attracted to the Session Bar. But tonight I love it.

Sure, it all makes an awful noise but the heat of such human activity rises with the diddly diddly and warms the room. Ah, sweet warmth…

I sip my Coopers and take off one of my scarves. The fiddle takes a solo. Diddly, diddly… Love it. I even tap my toe.

Previous articleEverything is looking splendid for July
Next articleIs Byron Visitor Centre past its use-by date?

Frank Ball, Tweed Heads The treatment of Christine Holgate while CEO of Australia Post is nothing short of scandalous. Not only is it a prime example...
Read more

It is time for everyone to stand up and #ChoosetoChallenge gendered violence in Australia. It is time for the culture to change.
Read more

'I want a formal investigation into this allegation of rape against me, not just to clear my name, but because it is the wishes of the woman’s family and friends...'
Read more

A short story about an encounter with a famous journalist in the old Parliament House press gallery, remembering the great Mungo MacCallum.
Read more
The Echo is made possible by the support of all of our advertisers.