From food to nudes: Lennox photographer follows his passion

Photographer John Bortolin was born and raised in the northern rivers – but it took him time away from home to realise how strongly he felt about its landscapes.

After a taking university degree in photography in Brisbane, John struggled to find work in the industry, moving to Sydney where he worked in hospitality and enjoyed the gay life.

When he moved back to Lennox Head six years ago he made his living photographing weddings until Sample publisher Remy Tancred spotted him and asked him to photograph food for her magazine.

‘Before I knew it I had become known as a food photographer,’ he says, ‘quite to my surprise.’

While he loved being able to work in his chosen field, John still harboured a dream to get out of the studio and into the open air.

‘It was the beautiful, subtropical landscapes that drew me back to the northern rivers and I wanted to start working with our wonderful natural light.’

He began returning to old places he had shot with his first camera as a kid and used his training to record them more authentically than he’d previously been able to. 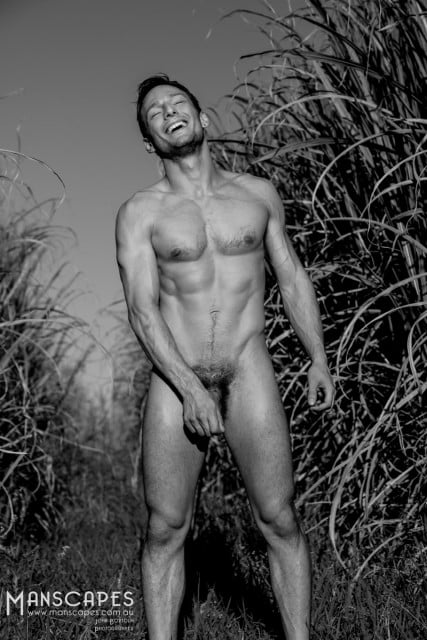 ‘Still there was something missing. It’s one thing to photograph a landscape well, it’s another to see people interacting with it.’

‘So I hatched a plan to bring together my two great passions: photography and the male body.’

Since Baron von Gloeden began pointing his camera at the men of Taormina early last century, photographers have seen the male nude in nature as an archetypal combination.

But, despite the free-living reputation of the rainbow region, finding men prepared to front his lens without their clothes proved more of a challenge than John had imagined.

‘I put the word out through Facebook, which drew a couple of tentative responses.

‘One of them, who was working out in the gym at SCU took the plunge. Once he saw how the photo-shoot turned out, other friends from the gym and the uni started to contact me.’

None of the photographers were nudists, none were professionals and few of them were gay men, so John had to work to gain their trust.

‘Usually we’d do a jeans and underwear shoot first, so they got used to working with me. After that most of them were quite comfortable getting naked for the camera. Although they were often quite shy and vulnerable to begin with, they became bolder as the process continued.’

While some of the guys are farmers and tradesmen, many are uni students who have spent time in the gym ‘Often they don’t realise, looking in the mirror, how far they’ve come. For many it was only after they saw the results of our work together that they came to appreciate their own bodies.

‘In many ways, while this book is a celebration of all men, it is also a tribute to each of these men who generously participated with their openness and willingness to transform and become a work of art.’

Bortolin describes himself as ‘an old school photographer’ and some of the black and whites in the book are taken with a 1960s medium format camera.

‘These square format images have a texture and grain that digital technology doesn’t allow, revealing a raw beauty. Nature has the best attributes for these outdoor shots so I didn’t need to interfere: the light is all natural.’

The A3 format glossy, self-published work is a two-year labour of love for John. He is thrilled with the results – and the responses he’s received since its launch at the Sydney Mardi Gras and more locally in Lennox Head last week.

‘I feel really blessed to be presenting this work – shooting the subjects of my choice in my favourite studio, the natural landscape.’

See more of John’s work and order the book online at the Manscapes website.

Previous articleCrowd funding for our pleasure
Next articleGreens face a choice: paranoia or proper policy

The World Naked Bike Ride happened across the globe (but not in all places) over the weekend and it wouldn't be a nude bike...
Read more
The Echo is made possible by the support of all of our advertisers and is brought to you by this week's sponsors Second Hand Saturday, Dan Murphys and Primex.