Plastic recycling to be turbocharged in NSW

The NSW Government says more plastic will be recycled and turned into new products across the state, thanks to $9 million in funding to support businesses transform their operations and access the latest plastic recycling technology.
Read more

Class action against Optus being considered

With an increasing number of Australians discovering they have been caught up in the Optus data breach, law firm Slater and Gordon is investigating a possible class action against the telecommunications company on behalf of current and former customers.
Read more

Neil Diamond is a phenomenon who gives truly special and personal shows that legions of fans return to see...
Read more 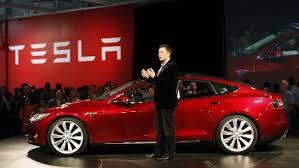 Electric vehicle manufacturer Tesla has unveiled its long awaited battery storage offerings, including a ‘Powerwall’ home battery storage systems that will sell for $US3,000 for a 7kWh system. It will offered in Australia early next year.

Musk said it was a crucial step in revolutionising the world’s energy system, and phasing out fossil fuels. Others suggested it was a watershed for the global energy industry.

‘What if we could move the electricity grid off of fossil fuels and towards renewable energy sources?’ Musk said in a prepared statement at the launch of Tesla Energy.

‘Once we’re able to rely on renewable energy sources for our power consumption, the top 50% of the dirtiest power generation resources could retire early. We would have a cleaner, smaller, and more resilient energy grid.’

Musk said that Tesla is not just an automotive company, it’s an ‘energy innovation company.’ And it will help homes, business, and utilities to ‘store sustainable and renewable energy to manage power demand, provide backup power and increase grid resilience.’ It would help some leave the grid altogether. ‘That may seem like an insane number, but it is not. The number of cars and trucks we have on the road is 2 billion,’ he said.

‘This is within the power of humanity to do. It is not impossible. It is something we can do,’ he said. ‘And that is the future we need to have.’

The Tesla announcement – along with similar moves by solar companies and software giants teaming up with battery storage and smart technology companies – represents another major threat to incumbent utilities.

Perhaps not entirely coincidentally, Australian utility giant AGL Energy on Friday launched its own battery storage initiative. Sungevity meanwhile said it would team up with Sonnenbatterie to bring $10,000 systems to consumers.

The centrepiece of the Tesla product range is the Tesla Powerwall – a rechargeable lithium-ion battery that Musk says it designed to store energy at a residential level for load shifting, backup power and self-consumption of solar power generation.

http://reneweconomy.com.au/wp-content/uploads/2015/05/tesla-powerwall.jpgIt will consist of a lithium-ion battery pack, liquid thermal control system and software that receives dispatch commands from a solar inverter. It can be mounted on the wall and is integrated with the local grid.

Musk says the battery can be used for load shifting, increasing self-consumption of solar power generation, and for back-up power in the event of an outage.

Musk says the Tesla offering was the ‘missing piece’ in a technology revolution.

‘The problem with existing batteries suck,’ he said at the launch. ‘They are expensive and unreliable, stinky, ugly, bad in every way.’

The Powerwall is available in 10kWh, if wanted for backup applications, or 7kWh if optimised for daily use applications. Tesla says it will sell these batteries to installers for $US3,500 for 10kWh and $US3,000 for the 7kWh. This excludes the price of inverters and installation.

The range will be offered within a few months – and scale up when the Gigafactory is operating – and in Australia in early 2016, along the same pricing guidelines, give it or take a few dollars for foreign exchange.

And Tesla has also announced it will team up with Canberra-based Reposit Power, which is rolling out a series of trials enabling households with solar and storage to trade energy during the day.

Reposit Power says its technology will be integrated with the Tesla battery storage unit. Director Dean Spaccavento said the company has been overwhelmed with interest within Australian and internationally since it launched a pilot of its GridCredits technology late last year.

‘We are excited to be working with Tesla, the pioneer of electric cars, who today announced they will be producing batteries for homes. Our world first GridCredits technology intelligently decides on behalf of households throughout the day whether to store energy in the battery or sell it back to the grid at a profit.’

Analysts say the Tesla pricing is definitely at the bottom of the range of battery technology costs, and will likely hasten the transition to battery storage – already earmarked by retailers, generators, networks, regulators and analysts alike as the ‘next big thing’ in energy markets, and likely to have even more of an impact than the solar boom of the past five years.

Tesla’s lithium ion battery costs are already at the low end of the range, and technology costs are likely to fall further once the so-called Giga-factory, the $5 billion production line that will be the biggest of its kind in the world, begins production.

In the household market, Tesla is partnering with the likes of inverter manufacturer Solar Edge and other californian installers.

TreeHouse, a sustainable home improvement store, says is collaborating with Tesla to sell the Powerwall home battery. ‘For the first time, running your home on a battery will be affordable and easy,’ says TreeHouse co-founder and president Jason Ballard.

‘I think in the near future, having a battery in your home will be as normal as having a water heater or a dishwasher. This just takes us one step closer to being able to power homes completely without the use of fossil fuels.’

In the business sector, Tesla says it is launching pilot programs with retail chain Target, as well as Amazon, which will be trialling a 4.8MWh program for its data centres in northern California.  ’Batteries are important for both data centre reliability and as enablers for the efficient application of renewable power,’ the company said.

Tesla is also targeting the utility scale market, with 100kWh battery blocks can be grouped to scale from 500kWh to more than 10MWh. It says these systems are capable of 2hr or 4hr continuous net discharge power using grid tied bi-directional inverters.

These systems are designed to firm up renewable generation, act as on-demand distributed power generation, act as a buffer while the power output from a large generation source is ramping up or down, delivering power instantly to smoothly transition output to the required level, improving power quality, defer costly infrastructure upgrades, and manage peak demand.

And it’s looking at micro-grids, which many tip will become typical in major cities, and towns, rather than relying on centralised power stations and the hub and spoke model of networks. ‘(This) will change the way we build our cities forever,’ said Susan Kennedy, the head of Advanced Microgrid Solutions.

Tesla says it is partnering with micro grid specialist OnCor, and with grid operator Southern California Edison,  with whom it will look to combine solar, household storage, and electric vehicles, as well as trialling grid based solutions, and AES Systems.

Not everyone is impressed. Least of all Tesla’s rivals.  Rival battery storage developer Aleva is doubtful about Tesla’s ability to crack the utility scale market, while Imergy, a developer of flow batteries, says there will be plenty of competition.

‘The energy market is a $20 Billion market with a broad spectrum of storage requirements,’ Imergy CEO Bill Watkins said. ‘There are a number of energy storage technologies available to address those specific market requirements and more than enough opportunity for a number of these technologies – and the companies developing them – to succeed.’