The North Coast region of NSW has already experienced significant climate change: average temperatures on the east coast of Australia have increased by around 0.7 °C compared to pre-industrial levels, and this warming trend is expected to continue. The Northern NSW region has been the subject of very detailed climate change modelling by researchers at the Climate Change Research Centre at the University of NSW.

Heatwaves on the rise

Both hot days and hot nights will become hotter and cold nights will become rarer according to their research. On average both maximum and minimum temperatures are predicted to increase by 0.7 degrees by 2030, and by 2.0 degrees by 2070 (compared to the year 2000). Really hot days will occur more frequently in summer, and the temperature of the hottest days in summer will increase by over 2 degrees by 2070. This will lead to more severe heatwaves and increased heat stress in people and wildlife. This is an important public health issue, particularly for the elderly, as there is a large and increasing number of older residents here in Northern NSW. Annual average rainfall is not likely to change much by 2030, but by 2070 the science indicates that it is likely to get wetter on average here on the North Coast. However, if we break these predictions down by season, rainfall is predicted to decrease in winter (by up to 20 per cent in some areas), but increase in spring and autumn by 2030, with the spring trends increasing in 2070. In summer, there is no clear indication of how rainfall will change by 2030, but by 2070 the science indicates rainfall will increase slightly throughout the whole North Coast, with up to 10–20 per cent increases for the far north coastal fringe. This means that the winters will be dryer and the spring and summer could see more extreme rain events like Ex-Cyclone Debbie in 2017.

Average fire weather, as measured by the Forest Fire Danger Index (FFDI) is predicted to increase in spring and summer. The FFDI takes into account temperature, humidity, wind speed and fuel load. The number of severe fire weather days, when the FFDI exceeds 50, is also predicted to increase in spring and summer. This is bad news for the North Coast: the recent, unprecedented ‘Black Summer’ fires have already given us a taste of what the future has in store for us. It means there will be more frequent, more deadly fires in areas where there has historically been infrequent or no fire activity, like the rainforests of the Lamington National Park in southeast Queensland or Mt Nardi in Northern NSW.

Heat-related illnesses include heat cramps, heat exhaustion and heat stroke. These conditions can occur when we are exposed to extreme heat and our body can no longer cool itself or function effectively. Photo Queensland Health.

Underpinning these predictions are climate models and lots of other types of models that use climate model results. Climate models are large computer programs that use quantitative methods to simulate the interactions of the Earth’s atmosphere, oceans, land surface and ice. Each of these aspects is represented in a climate model as a multitude of mathematical equations which encompass the best scientific understanding of natural processes; processes that have been studied by scientists from decades to hundreds of years.

There are over 40 climate models around the world, each with their own ‘recipe’ for representing different aspects of the natural world. Due to its complexity, climate modelling is not perfect or easily understood by non-scientists, but it is actually the best tool we have to understand what is happening to our climate and to make predictions for the future.

Climate models have generally been pretty good at reproducing the observed global temperature over the past century, and their performance has improved over time as scientific knowledge of the natural world grows, and as modelling techniques have become more sophisticated. Climate models have already predicted many changes that have eventuated, indicating that they are a good guide to future climate changes. Last year, scientists evaluated how well climate models predicted global surface temperatures between 1970 and 2007, and found ‘14 out of the 17 model projections [were] indistinguishable from reality’. Therefore, only the most rusted-on, tin-foil-hat-wearing climate change denier would think that climate modelling results were anything other than a rational basis on which to plan for the future.

Climate change modelling is every bit as rigorous and scientifically defendable as the COVID-19 epidemiological modelling. The COVID modelling that the current coalition government have embraced as the premise to completely change Australian’s way of life and upend the economy to avert what was undoubtedly a looming catastrophe and allowed Australia to avoid the devastating outcomes that countries like the US, UK, Italy and Spain are facing. If only climate change deniers within the government and general public understood this (or cared…) before so blithely dismissing climate change as a scam, conspiracy (or ‘crap’!), or stating that climate modelling is ‘unproven’ and ineffectual. As is so often the case, the less you know about something, the less you know how much there is you don’t know; this is also referred to as the Dunning-Kruger Effect.

There will always be individuals and groups who are ideologically impervious to (or wilfully ignorant of) solid, scientific information. However, the last few months have shown us that the difference in the Federal government’s attitudes towards, and willingness to take strong action on, the two existential crises of COVID-19 and climate change is bafflingly irrational and scientifically indefensible. 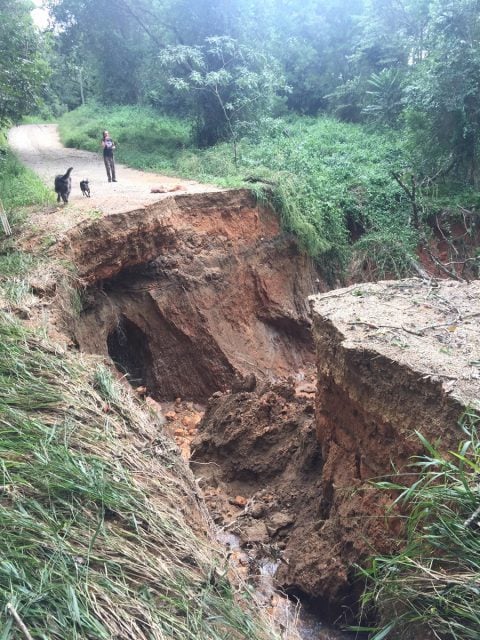 Manns Road at Rowlands Creek Road is the shortest road link between Byron and Tweed Shires and was closed owing to this massive landslip during the March 2017 Ex-Cyclone Debbie flooding. Photo Will Matthews.

Explore global heating in your area

Climate models make predictions at the scale of 60–300 square kilometres, so in order to deal with climate change at a local level the model results are scaled down to 10’s of kilometres or less using sophisticated mathematical techniques. Scientists at the CSIRO and the Bureau of Meteorology have analysed these scaled-down climate predictions for rainfall and temperature and produced an online climate change planning tool called the Climate Analogues Explorer.

This tool matches the predicted future climate of towns around Australia with the present-day climate experienced in another location (this is called an ‘analogue climate’). It provides a meaningful interpretation of climate model data to help people make sense of what climate change will mean to them in their localities, and to assist us in our local climate change adaptation planning. The tool allows us to ask questions like: If the temperature of my town increases by 2 (or 3 or 4) degrees, and the rainfall decreases (or increases) by 20 per cent in 2050, what town in Australia currently has this climate? It’s a fun ‘what if’ game!

Specific predictions of climate change have been carried out for four major centres within the Northern Rivers region: Ballina, Lismore, Murwillumbah and Tweed Heads.

Under a ‘Business as Usual’ climate change scenario (ie on our current high carbon emissions trajectory), the majority of climate models used in this study predict that by 2050, Ballina will get hotter and a bit drier, with an average (of the model predictions) of 1.9 degrees warming and an average reduction of 6 per cent in rainfall. This means that in 2050, Ballina’s climate could resemble the present-day climate of Sarina (near Mackay), Noosa or Caboolture, in Queensland.

In 2090, when today’s primary school kids will be in their 80’s, the majority of climate models predict that Ballina’s average annual temperature will have increased by 4.2 degrees on average. 4.2 degrees may not sound Earth-shattering, but it is worth noting that the last time the Earth was 5 degrees cooler, it was during the height of the last ice age!

The good news is that we have the power to prevent these outcomes. If we chose to reduce our carbon emissions sufficiently (along the lines of lower emissions climate change scenarios), most models predict much less warming and no significant change in rainfall by 2050 for these Northern Rivers towns. Ballina would still experience some climate change by 2050, but instead of ending up with a climate like that of present-day Mackay, it would experience a climate similar to that of present-day Murwillumbah, Tweed Heads, or the Gold Coast – the adaptation to which would be much more manageable and much less expensive.

Climate change prediction: Erring on the side of least drama?

6 responses to “Planet Watch: As the NSW North Coast heats up what does it mean for you?”