Ninbella Gallery in Bangalow sure has some stories to tell. Featuring impressive works by some of Australia’s most sought-after painters including Vlad Kolas, who studied at the National Art School in Sydney in the late 90s and graduated with a Bachelor of Visual Art from Southern Cross University in 2002. In 2012, Vlad won the Northern Rivers Portrait Prize with a self-portrait. Music is a crucial element to Vlad’s artistic practice, giving him energy and inspiration. ‘You know how you dance when no-one’s looking? I’m doing that with the paintbrush. Then you stand back and assess what you did and make some adjustments’. Growing up at Bondi Beach, Vlad loved surfing and music, and tried his hand at carpentry before he realised it wasn’t going to deliver him the creative and career freedom he desired. It was Vlad’s partner Jessica, a glass artist, who recognised Vlad’s talent and prompted him to study art instead. Vlad’s mother and grandfather were both artists, and he’d absorbed many of their skills and much of their knowledge. ‘Visually being around it from an early age, it gets ingrained in your head; you don’t even realise it’. Prior to winning the Northern Rivers Portrait Prize in 2102, Vlad had been trying to find his own style, trying to make something different from what had been done before. ‘I thought everything’s been explored in art, and I didn’t want to place myself in the past. Now I realise no-one’s going to draw like you or paint like you. You just do what you can do.’ Vlad’s semi-abstract style is inspired by his mother’s and grandfather’s portraiture and figurative work, as well as expressionists and abstract artists such as Willem De Kooning.

His work is currently on show. www.ninbella.com

NORPA and Belloo Creative present a joy-filled comedy drama about some of Australia’s forgotten wild women.

The play features two of Queensland’s most-loved-and-acclaimed actors, Roxanne McDonald and Barbara Lowing, and was written especially for them, using stories from their own lives mixed with incredible true stories of female adventurers and bushrangers. Rovers is a comedy drama that deals with aspects of the actors’ lives, their ancestors and some of Australia’s most notorious wild women, including bushrangers ‘Black Mary’ and Elizabeth Jessie Hickman.

Out of Range are a band that are hard to pigeonhole, with a unique blend of roots, gypsy and cabaret. They like to call themselves genre-fluid, which certainly highlights the unique quirkiness of this band but entwined with the happy upbeat tunes there can sometimes be found a serious message. One of their new songs Spinach in the pot appears to be about cooking a meal but upon closer examination this song talks about the plight of musicians and artists of this area being able to afford the high rents and changing demographic. The answer for these musicians is to get out into nature, light a fire, play music, share food and love one another.

Join them for the love, the nature and the food at Sphinx Rock Cafe for Fathers Day, 2 Sept or at Nimbin Roots Festival 14 Sept. 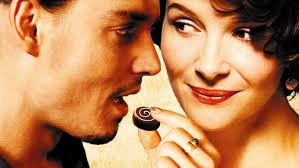 When mysterious Vianne and her child arrive in a tranquil French town in the winter of 1959, no-one could have imagined the impact that she and her spirited daughter would have on the community stubbornly rooted in tradition. Within days, she opens an unusual chocolate shop, across the square from the church. Her ability to perceive her customers’ desires and satisfy them with just the right confection coaxes the villagers to abandon themselves to temptation – just as Lent begins.

Mullumbimby High are holding a fundraising screening of this much-loved film at the Brunswick Picture House with Ellen Briggs as host.

There’s nothing that brings a community together as effectively as sport. The Brunswick Valley Bulldogs know this all too well and are having a Name Our Mascot Day at the Stan Thompson Oval this Sunday to celebrate the arrival of their mascot from the USA. Well, I think it’s probably the mascot costume; some lucky dad is probably going to have the pleasure of wearing the suit at the games! That’s always worth seeing! So if you want to meet the kids and coaches and the parents, and find out more about this fun and energetic little club, then this is the day; there’s even a band playing! Smokey Fields… a dude who clings to a time when Elvis was king and Cash wore black. With a voice like the Big O he’s sure to make the day one to remember. Oh, and there’s a crazy hat comp too!

Two Wolves at The Byron Theatre

An old man tells his grandson one evening that there is a battle raging inside him, inside all of us. A terrible battle between two wolves. One wolf is bad – pride, jealousy, greed. The other wolf is good – kindness, hope, truth. The child asks, ‘Who will win?’ The grandfather answers simply, ‘The one you feed.’

One afternoon, four police officers visit Ben’s home. Minutes after they leave, his parents arrive. Ben and his little sister Olive are bundled into the car and told they’re going on a holiday. Which is weird, because Ben’s family never goes on holidays. Things aren’t right and Ben knows it. His parents are on the run. So Ben and Olive are running too.

Ben gathers evidence and tries to uncover what his parents have done. The trouble is, if he figures it out, what does he do next? Tell someone? Or keep the secret and live life on the run? Produced by BANG! Academy of Performing Arts, Two Wolves is a page-to-stage adaptation of the award-winning novel by Tristan Bancks. It is an engaging and suspenseful story combining physical theatre, visual effects and engineered soundscape that will appeal to an audience aged 10+.

Mullumbimby Public School are holding their annual country fair this Sunday with carnival rides, live music, pony rides and delicious food. It’s a great way for community to come together and raise money for the local school at the same time. And wait – there’s more. There will be stalls incorporating fun activities such as a gumboot-tossing competition, PGA inflatable hitting bay, Goat Poo Lotto, and a working-dog display! The kids can go wild on carnival rides or take a slower approach with plenty of craft options, slime making or a pony ride. For the adults there will be delicious homemade food and coffee, a plant sale and some awesome prizes in the silent auction including: Falls Festival passes, Golf Club packages, cafe/restaurant vouchers, Bluesfest 2019 tickets, loads of local vouchers and gifts.

Jackie Loeb and Dave Eastgate are without a doubt Australia’s leading music-based comedians. Incredible musicians in their own right and incredible comedians, they have what every other comedian in Australia wishes they had: actual talent in something more impressive than being a smartarse! Combine the dark art of standup with some insane guitar work and even more ribald and impressive standup and you have something pretty bloody special!

Comedy that Rocks, with Dave Eastgate, Jackie Loeb and MC Mandy Nolan. Tix at the door or online at mandynolan.com.au.