In the Wake of their Heart

The northern rivers is known for birthing talent that spreads onto the national and world stages and Byron Bay hardcore/metal band In Hearts Wake are on that track. They have announced a special hometown album launch show for their new album Earthwalker.

Last month In Hearts Wake announced the new album and their partnership with Carbon Neutral that has allowed them to plant a native tree for every copy of the album pre-ordered, in the hope of restoring and preserving the natural beauty of our environment.

In line with the band’s ecological ethos, every ticket purchased for the show will result in a native Australia biodiverse tree being planted in conjunction with the Earthwalker Carbon Neutral campaign.

The all-ages event will take place on Friday 2 May at the Youth Activity Centre, an iconic and intimate venue where the group played their first shows back in 2006.

Lending support are a string of solid local bands: Shackles, whose debut LP Forced To Regress is out now. Also on the lineup are Deceiver and As Chaos Falls.

Tickets will be limited and will be available at the door only for $10.

Doors 6pm. This is an all-ages drug-and-alcohol-free event. With a career spanning three decades, one of Australia’s finest singer/songwriters, Neil Murray, returns to the area to perform an intimate solo concert this weekend. This year he has a new album Bring Thunder & Rain, the twelfth release of his solo career.

From being a founding member of the Warumpi Band in the 1980s to an influential singer/songwriter of national significance, Neil has released a string of unique albums and is an APRA Song of the Year award recipient for penning the iconic My Island Home. He is also the writer of such classics as Blackfella Whitefella, Good Light in Broome, Native Born, Long Grass Band, Lights of Hay and many others.

Neil will introduce new songs from his latest release as well as renditions of well-known songs from his back catalogue. Support for the evening is Jimmy Dowling.

Don’t miss this engaging and fascinating performer, whose songs shine like so many rare gems hard won in an arduous journey through the nation’s conscience. Bangalow Bowling Club, Friday 2 May, 7.30pm.

Fuelled by passion for music and performance while combining the classic with the new, super roots band from Raglan, NZ, Cornerstone Roots brings the full vibes to 2014, featuring new tracks and new presence. This band believes in pushing the boundaries of the genre to make new contributions to music. Experience this harmonious live in the We Love To Create Music tour at the Byron Bay Brewery on Friday. 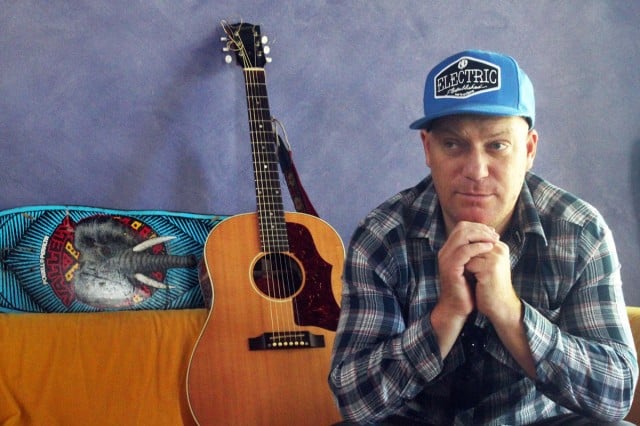 From Ireland to Byron

Andy Burke is an original singer/songwriter multi-instrumentalist from the heart of the west coast of Ireland. Andy has been playing pubs, clubs, and hotels, and had been in numerous bands over his 20-year music career.

Andy uses a Gibson J50 guitar accompanied by foot stomp and harmonica and, when needed, a loop station. His live gigs are always entertaining and lively. Come along and get in the groove with this Irish rocker on Monday at the Rails from 6.30pm.

Rub in the Hot Dub

The Hot Dub Time Machine phenomenon has well and truly hit Australian shores. On the back of sellout European tours and momentous feature performances for the Falls Festival and Sydney/Adelaide/Perth and Hobart festivals, the world’s first time-travelling dance party is set to hit every corner of the country this autumn with a much-anticipated club tour.

Hot Dub Time Machine was the undisputed highlight of recent Sydney, Perth and Adelaide festival sold-out runs. Two-storey-tall screens, confetti cannons and balloon drops are just a taste of what to expect as the ‘best party ever’ hits town

Get into the Dub this Saturday at the Beach Hotel. A special night in the memory of Dan Morgan. Dan, a gifted musician and SCU student, died seven years to the day. Some of Dan’s closest friends are coming together to celebrate in the only way they know how. Playing a mix of soulful blues and groove, they will also share one or two of Dan’s original compositions. Tuesday 6 May at the Platinum Lounge at the Lismore Workers Club from 7.30pm.

Previous articleByron beaten in union third round
Next articleCoalition hypocrisy? Abbott and Hockey in their own words

At a country star-studded event on Saturday evening in Tamworth, local artist Kim Cheshire ascended the stairs of the  Tamworth Regional Entertainment Centre to take the Golden Guitar for Alt Country Album of the Year – Looks Like Heaven.
Read more

140 years of music and community in Ballina

Ballina Shire Concert Band has been performing for the people of Ballina on a continuous basis since 1883, making it probably the longest-serving band in Australia. As they approach their 140th anniversary this year, they're on the hunt for new players, and memorabilia.
Read more

Today is the day to be out and proud about your favourite Australian music artists, while also helping the music industry charity Support Act deliver crisis relief services to musicians, managers, crew and music workers who are unable to work due to ill health or injury.
Read more

Are you interested in providing support for a young family in Byron Shire or bringing your children or grandchildren to a fun afternoon at the Bangalow Bowlo?
Read more