War is probably as old as humanity.

The natural world is much older, of course, but it’s been damaged and affected by human conflicts since we first started killing each other.

Historically, forests were cut down to build armadas (in Spain), salt was sprinkled on fields as a weapon of war to render the land uninhabitable (by ancient Romans and Assyrians) and entire landscapes were smashed beyond recognition in World War I.

Then World War II came along, and the problem became exponentially worse. 75 years since the end of that conflict, it’s become clear that wars between humans are also wars waged against the biosphere which sustains us.

Catch 22 and then some A wicked aspect of the problem is that wars – large and small, hot and cold – cause environmental damage, and that damage leads to further wars.

‘Scorched earth’ military practices destroy the environment so that it can’t support the enemy, whoever they are. Unfortunately, anything else living there is also killed.

In what’s been called the ‘largest act of environmental warfare in history’,  the Nationalist Chinese government in 1938 deliberately breached Yellow River levees, drowning many invading Japanese soldiers but also a massive number of Chinese peasant farmers.

The human death toll was 800,000, and thousands of square kilometres of land was flooded and destroyed, creating nearly 10 million refugees.

A more recent (and literal) example of scorched earth is the deliberate burning of the Kuwaiti oil fields, documented in the memorable Werner Herzog film Lessons of Darkness. Throughout history, when war has put refugees and armies on the move in large numbers, environmental destruction has been the first consequence, both in the form of introduced plants and animals, and stripping of country for food, shelter, and the materials for further warfare.

Animals and plants have been pushed towards extinction by this process.

Examples include the inhabitants of Akegera National Park during the Rwanda conflict, those of Laysan Island in the Pacific in WWII, and elephant, rhino and primate populations in the Sudan and Democratic Republic of Congo during the fighting there.

Short term desperation thinking in humans is a disaster for the natural environment, because sustainability is the last thing people think about when immediate survival is at stake.

The heat is on What looks from the outside like a religious or racial dispute often boils down to resources, which come into short supply because of previous conflicts, or climate change, or both.

Unfortunately, the biggest armed forces of the world are actively making the climate emergency worse, even when they’re not fighting.

Consider the fact that the US military is the world’s single largest consumer of oil, buying over 269,000 barrels of oil each day. The US Air Force alone purchased US$4.9 billion worth of fuel in 2017.

While exact figures are hard to come by, and other countries are far from innocent, the US Department of Defense has been described as ‘both the nation’s and the world’s largest polluter’, producing more hazardous waste than the five largest US chemical companies combined.

A little over one hundred years ago, the ‘war to end all wars’ saw unprecedented use of machinery to aid humans efforts to kill one another, but despite the extreme savagery of those battles, many of their locations in Belgium and France are now productive farmland, probably helped more than anything by the additional fertiliser. Before and after spraying Agent Orange. Photo Wikipedia.

Subsequent wars are a very different story, with new killing technologies such as nuclear weapons and Agent Orange (20 million gallons of the herbicide was used in Vietnam alone) causing ongoing environmental and human catastrophes.

The residues of war are increasingly toxic.

A classic example is depleted uranium. Originally developed for its armour piercing abilities (and as a market for nuclear waste), DU is continuing to cause birth defects and cancers years after its use on the battlefield, both in soldiers and civilians.

Nuclear weapons testing has caused disastrous long term impacts on country and on many indigenous people, from the South Pacific to Nevada, and from Kazakhstan to Australia.

Conventional military training also has negative environmental consequences, such as at Shoalwater Bay, in Queensland.

In Iraq, desertification caused by warfare is now forcing the country to import 80% of its food. PFOS and PFAS substances, developed for firefighting by 3M and Dupont, and highly toxic in minute quantities, are leaching from military airfields into surrounding suburbs and ecosystems around the world.

Affected sites in Australia include Williamtown near Newcastle, Oakey in Queensland and the Tindal RAAF base near Katherine in the Northern Territory.

There is research that whales are being killed and disrupted by military submarine communications technology, and the oceans are also being hammered by massive quantities of military waste, including nuclear waste.

Always look on the bright side of death

Paradoxically, the military’s ultimate need to deal with reality – rather than the fantasy worlds of politicians and economists – has the potential to become a force for good even as our species’ self destructive streak reaches entirely suicidal (and ecocidal) dimensions.

Senior military figures in the US are pretty much the only public servants in that country who have ignored the current president’s orders to scrub the climate change emergency as a major concern.

Naval bases are threatened by rising seas, and the climate emergency also presents a clear and present danger to food and water supplies, leading potentially to mass movements of people beyond the ability of military forces to control them.

It’s been suggested that framing the climate emergency as a national security emergency, and not just an environmental issue, might change the way many conservative people feel about it, and what they’re prepared to do in response, including the uptake of renewables. In 2019, a leaked speech of Defence Force Chief General Angus Campbell showed that the Australian military is well aware of the increasing climate risks, even as its political masters continue to pretend otherwise.

The speech noted that Australia is in ‘the most natural disaster prone region in the world’, with ‘climate change predicted to make disasters more extreme and more common.’

Even if motivated primarily by strategic reasons, (and a little weirdly for an organisation that spends most of its time and energy securing oil supplies) the US military is spending up big on renewable energy, as well as electric tank, ship and drone technology, somewhat reducing its enormous environmental bootprint.

The American academic Sarah Light has written about what she calls the ‘Military-Environmental Complex’, describing her nation’s military as being ‘engaged in an extensive undertaking to improve its sustainable energy use by reducing demand and developing renewables in its multiple roles as a war fighter, a landlord, a first user of pre-commercial technologies, and a potential high-demand consumer.’

Many technologies developed originally for military use, and with military funding, have become useful and ubiquitous parts of many people’s lives, as well as vital tools for environmental and peace activists. Examples include GPS, drones, and the internet.

As a pointer to what is possible globally, armies have been used in major reafforestation programs in places such as Pakistan, India and Venezuela, and portable renewable tech developed for so-called ‘smart camps’ by the military has the potential to revolutionise civilian life, especially for the poor and homeless.

In spite of these feel good stories though, recent reports of Indian and Chinese troops killing each other with primitive weapons in the disputed mountain territory between their nations is a reminder that our world remains on the brink of annihilation, as it has been since the Cold War.

Both these countries have nuclear missiles, and they are part of a growing nuclear club which now includes Israel and North Korea. 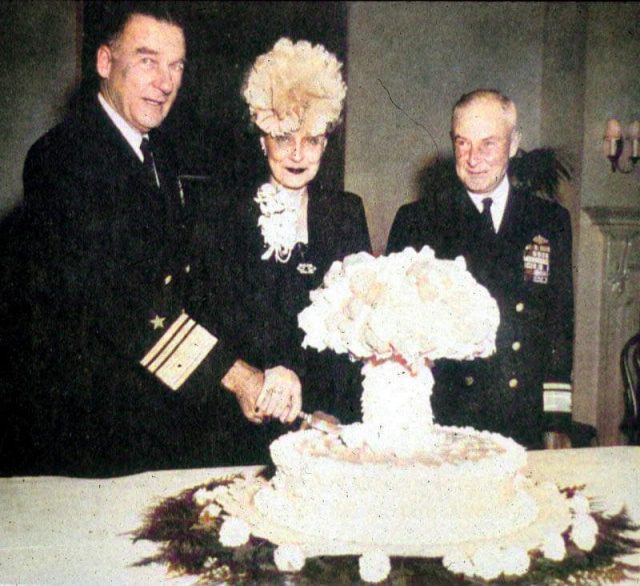 A cake to celebrate a nuclear test. US military photo, 1946.

The Doomsday Clock stands at 100 seconds to midnight.

In spite of the pressing survival issues on our planet, vast quantities of resources (and lives, human and otherwise), continue to be poured into the global war machine, to little or no quantifiable military result.

Vietnam, Afghanistan, and Iraq are a few obvious examples. The only winners are the weapons-sellers and their political friends.

The US President is rolling back arms treaties, and wants to buy more nuclear weapons.

In Australia, $270 billion has recently been found from somewhere for the military, to buy long range missiles amongst other war machinery. This will further destabilise our region while offering no guarantees of security.

Meanwhile some human victims of the recent climate-fuelled bushfire crisis are still living in tents, and over a billion native animals are dead.

The priorities of our ‘leaders’ are clear. environmentwar
← Back to previous page

12 responses to “Planet Watch: War and the environment”